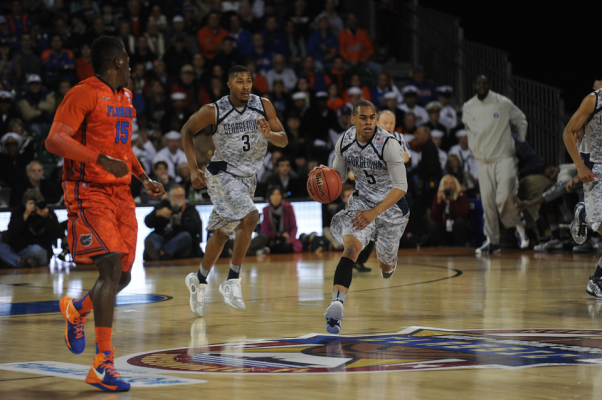 Since its invention around 125 years ago, basketball has exploded to become one of the most popular and most participated in sports in the world. It is played widely on almost every continent on earth (except perhaps Antarctica), and offers major professional opportunities for skilled players. It has changed a lot since its inception, but the main rules and ideas of the game have remained the same. However, basketball has also inspired a number of variations and other sports which are played throughout the world. Some of these are simply variations of the basketball game, while others are new sports which are huge themselves. They include:

This form of the game is very popular in areas where space is limited, or where there aren’t enough players for two full teams. Usually it is played with either 2v2 or 3v3, but you can have up to four players per team. You only have one basket, which is located at the end of the court.

When a team gains possession of the ball, they need to carry it over the half-way line to get the ‘key’ which allows them to score. Once in possession comprar castillos inflables baratos of the key, the team then turns around and attacks the basket, trying to score. If it is turned over, then the other team must go for the key before they can score. This type of game is good, because it allows two games to be played at the same time on a normal sized basketball court.

3 x 3 – This is the official form of half-court basketball, and has become popular in recent times. It is the largest urban team sport in the world with almost 60,000 registered members. Its highest competition is the FIBA 3×3 World Tour, which includes huge exposure and prize money. As a relatively new form of the game, it is being actively promoted and grown throughout the world, so expect it to get much bigger in coming years!

Slamball is generally seen as a form of basketball designed purely for entertainment purposes. While this may be somewhat true, it is also a relatively competitive sport in many parts of the world. It is usually played with four players from each team on court at any time, which is one less than traditional basketball.

The game consists of four short six minute quarters, and is extremely short and fast paced. There are a number of different rule changes from traditional basketball, but the main one of these is the court. Under each basket in the three point zone three trampolines are placed. This allows spectacular dunks and trick shots to be made by attackers, and impressive vertical defence from defenders.

Again, Slamball is often regarded as an entertainment sport, much like WWE. It is shown by major television channels throughout the world, and is played by a number of different countries.

The teams are made up of eight players – four males and four females. They are designated as either defenders or attackers, and are required to stay in their half of the field. Defenders always stay in the defensive zone and vice versa. The hoop is very similar to a netball hoop, or a basketball hoop without a backboard. The hoop isn’t located at the very end of the zone: rather, it is two thirds of the distance between the centre of the court and the end of the zone.

Ringball is the South African version of basketball, and has been around for over a hundred years. It is popular in South Africa, Namibia, Botswana, Lesotho, India, and Mauritius. It is played with nine players from each team, and is single gender. It is quite similar to a netball game in that the court is divided into three distinct zones. Each zone has three players from each team whose goal is to work together to score points for their team.

The main principle of ringball is speed. Players must pass almost instantly after gaining possession of the ball. They can’t shoot when their defender is between them and the hoop, which means that they must pass around rapidly until an opening occurs.

Netball is the traditional female sport of the commonwealth. It was developed in England in the 1890’s and quickly spread throughout the colonies. The international netball federation (INF) is composed of 60 different national teams from different countries, who play in various international competitions.

The rules of netball are similar to both ringball and korfball. Players must stay in their zones at all times, and each position has different zone placements. Goals are scored by shooting through a hoop at the end of the court, which has no backboard.

Players aren’t allowed to hold the ball for more than three seconds at a time, and aren’t allowed to run with the ball. They must stay in the same place they caught it in, moving only when they aren’t in possession.